Wednesday 2nd April was World Autism Awareness Day and in fact the whole of April is Autism Awareness month. I happened to post something on Facebook that morning about my Gabs and his aspergers and was completely staggered when it went completely nuts, getting over 400 likes on my own page, some 300 on a mum group I shared it on and was shared by nearly 100 people so I have lost count now of how many likes it has on all those pages combined but it must be over a thousand! I was also inundated by private messages all day thanking me for writing it and also contact from other mums of aspies or suspected aspies basically reaching out for some company in this crazy journey that is parenting an aspergers child! or just some advice or pointers to other support resources.

I was a little bit scared at first, that I had brought so much attention to my Gabi when I just meant to bring attention and awareness to his condition, but then after such an overwhelmingly positive response and so many people saying that it has helped and moved them I realised me and my Gabs were just meant to do this and I’m so happy we’ve helped people by sharing openly who we are. (Anyone who knows me well knows that openness is one of my defining characteristics, admittedly usually manifesting as “chronic over-sharing on facebook”!) and creating greater transparency in the world my driving force.

Actually, it was weird that day. I am really, really NOT a morning person! I rarely acheive anything productive before 10am and only then if I’ve had my cappuccino. But that day I woke up with a really strong urge to share a certain photo of Gabs and the words I wanted to post were already in my head. So I can’t take the credit, really… I was definitely “guided” to do it one way or the other. Someone up there obviously knew it was needed. But I didn’t know that at the time and was fairly blown away by the response!

So here is my original post from the 2nd April in full so that anyone who is interested can find it easily and come back to it if needed. I realise now that Aspergers is so much more common than we realise and so little talked about and shared that there is a whole community of mums and dads struggling out there who at the very beginning of their journey of suspicions that their child may be somewhere on the autism spectrum, need a gentle way into finding information at their own pace without being overwhelmed. So to that end I will try to use my blog a little more in future for posting stories, links and tidbits of information I’ve found useful with Gabs. Really hope it helps and if anyone wants to get in touch here or on my facebook page then please do!

Today is Autism Awareness Day. This is my boy, Gabriel. He’s four and is quite a long way down the long path of being diagnosed with Aspergers (now officially ASD) or High-functioning autism. He is INCREDIBLY bright. He taught himself to read before he was two years old. He is absolutely obsessed with astronomy, space, planets, stars, chemistry, physics. If you ask him a question he will often reply with a fact about space. He understands the basics of nuclear fusion and likes to tell me what molecules comprise certain chemicals [?!]. He, like other aspies has very linear thinking. He is not able to diverge from one path of thought until it reaches it’s conclusion. This is very frustrating when we are in a rush for school and I want to know what he wants for breakfast but he can’t interrupt listing all the stars in the Milky Way galaxy from smallest to biggest. He needs order and disrupting his order of things causes him to become extremely distressed. He lacks certain motor skills other children his age have. He can’t dress himself or undress very well and gets frustrated to the point of a meltdown, he struggles with riding a bike. His sensory motor issues mean I have to hold his hand in the street when all his friends are allowed to run ahead because he can’t control his movements as well and constantly bumps into people or runs away. Little things upset him that people can’t see or understand, from the noise of a hand drier in a public toilet, to a sudden loud noise or somebody “hurting” him by brushing his arm or hand (aspies can be extremely physically sensitive). He is very literal and can’t understand sayings like “It’s raining cats and dogs”. He gets so cross because clearly cats and dogs are not falling from the sky! He can’t understand body language very well and struggles with empathy although he is the most big hearted, kind boy I know. His face doesn’t accurately reflect his emotions which can be confusing and his voice is quite monotone and clipped, hiding the fact he is acutely vulnerable and sensitive. His brain just is not wired the same way as other people’s and the world is a frustrating and difficult place to live in for him because of this. Aspies are prone to high levels of anxiety and this manifests in lots of ways that might seem strange to you or I but are just their way of coping in a society not designed to be easy for people on the autism spectrum. Fitting in at school has been the biggest challenge of his life. He can’t sit still, he finds being around a lot of people at once overwhelming. Life isn’t easy for him. It hasn’t been easy for me either, to be his mummy. But he’s talented and amazing and I have a deep sense of knowing in my bones that he is going to really BE someone, that his aspergers brain will enable him to contribute some incredible gifts to the world. He is my heart beating outside of my body, my whole world and I will do everything in my power to make his life wonderful. I would die for him. #aspiesareawesome So that’s my Gabi. ❤ April is Autism Awareness Month. 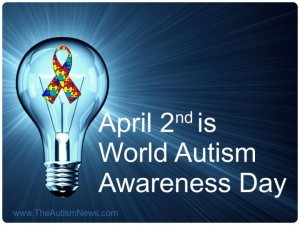 Thank You for reading, if you’ve got this far….. April is Autism Awareness month. Please share!
Advertisement