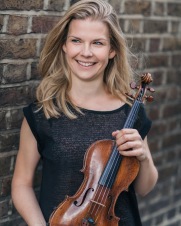 Antonia Azoitei studied at the Royal Academy of Music with Erich Gruenberg, graduating in 2004 with the PGDip, DipRAM and the Beare Prize for an outstanding final recital, for which she received a Tim Baker gold-mounted bow. As a soloist and chamber musician Antonia has performed regularly with London Concertante at St. Martin-in-the-Fields and as leader of the Vilensky Quartet she toured the UK and performed in New York for SONY. The composer Artem Vassiliev composed a piano quintet dedicated to the ensemble which they premiered in London with pianist Tatiana Ursova and performed across the UK. In 2005 Antonia toured Japan with the Eimer Quintet and the Nagoya Philharmonic, including a live broadcast on Japanese TV. As soloist Antonia has also performed with the Mendelssohn on Mull Festival Chamber Orchestra  and the Yorke Trust Baroque Orchestra of which she was also leader. She has performed in both concerto and recital performances for HRH the Duke of Edinburgh. Antonia was a member of the BBC Concert Orchestra for two years, leaving in 2008 to freelance with orchestras such as the City of London Sinfonia, with whom she has appeared as Guest Principal second violin and Guest Co-Principal first violin and toured Mexico in May 2015. As a chamber musician and duo partner, Antonia has performed with artists such Simon Lane, Nicola Eimer, Florian Mitrea, the Callino Quartet and members of the Jubilee Quartet. Antonia was a founder and director of the award-winning concert series of chamber music for the parents of babies and small children, Classical Babies before relinquishing her post to pursue full-time acting training at drama school in 2015.