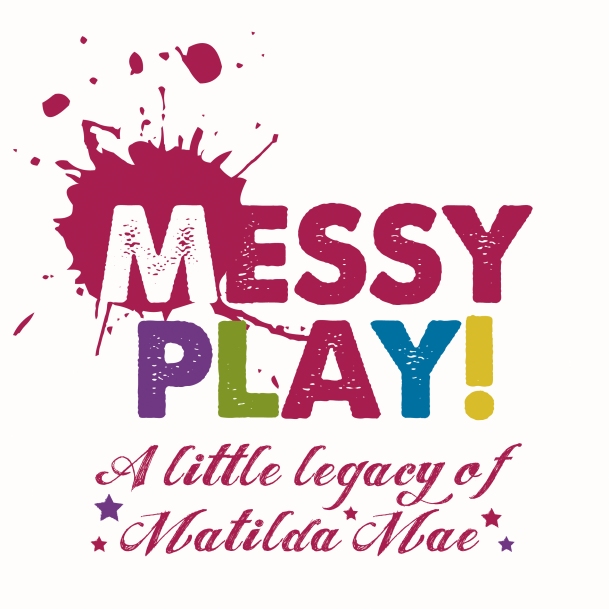 I’ve really missed Messy Play for Matilda Mae over the last few months. This is our first messy play in the new house (which really isn’t that new anymore!) which should tell you in one second that I’m really not the messy play kind of mum… I’m great at impulse activities and outings to the park and trips to places like Tower Bridge and the London Transport Museum and snuggling up with hot chocolate and Disney DVDs, but arts and crafts really require some planning and often buying for and I’m not that organised. (This is also why I only bake once in a blue moon.) That’s not to say that I’m a lazy mother, quite the opposite! I jump and chase and tickle and run and sing and we do looooads of drawing with felt tips and crayons and building with lego. But I’m just not really one of those mums doing her usual artsy, crafty routine with the kids and then linking-up to share it with Matilda Mae’s mummy’s blog linky just to join in. Without Messy Play for Matilda Mae, I really wouldn’t be doing this stuff at all.

It’s only when I see other people’s blog posts or Edspire’s herself that I think, “Oh, look what other people are doing. My boys would love that!” and that gives me the nudge I need to go shopping or rummage in the cupboards and pull an idea together. And every time I do, without fail the three of us – my boys and me – we have the best time! Today was no exception. This was the loveliest, calmest, happiest afternoon we have had since moving in back in August. And when I look back on these messy play activities I feel proud of myself and my boys and, frankly like a slightly better version of myself. So I’m really glad Messy Play is back! Here’s what we did today…

I love London in the Autumn. I love the colours in the city and the fact that the leaves pile up everywhere, bringing nature into the concrete jungle a little more noticeably, and I am loving having a garden this year for the first time ever. I’d seen other people do leaf rubbings with crayons and paper and kept meaning to do it but my four year old Gabriel is hugely into drawing  planets, the solar system and his latest obsession, Tower Bridge and wasn’t really interested in colouring leaves.

He does love cutting and painting though. I had seen this leaf wreath idea on Pinterest

and thought he’d love it and then when I saw silver and gold poster paints today in Sainsburys (if you ask him, Gabs currently says his favourite colours are black, white, silver and gold) I came up with a plan…

First we got our wellies on and played in the garden, collecting leaves, finding baby slugs – the smallest I’ve ever seen – on the back of a leaf, laughing and scooting. 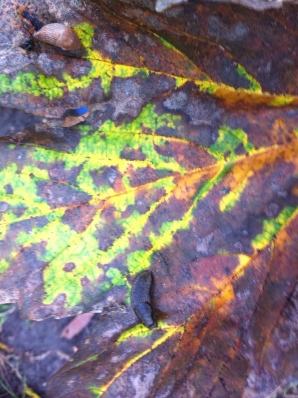 Even the littlest thing of seeing our boots and shoes by the back door made me feel so happy because it’s the first time I’ve had a back door into a garden and feels so homely! It reminds me of my family home and  happy childhood memories.

So with our pile of leaves, the table papered and our wellies at the door, we got started. While rummaging in the upstairs cupboard for some art supplies I found Gabs’ bug-viewer which we used to look closely at the veins and lines on the leaves.

I also stumbled upon Gabi’s Lightning McQueen money tin ,which we use as a kind of swear-box: Every time I say “shut-up” or something else less than exemplary I have to put money in (2p or 10p depending on how naughty I’ve been) and every time he says something similar I take money out again. (At least I say I do, and he believes me but in reality I can’t get in there without a can opener and I’m not keeping tabs.) Anyway, it’s been missing for a while now and I owe him a small fortune but he seemed happy with the 75p I had in my wallet.

First Gabs cut a circle out of the middle of a paper plate and then we got painting. This was probably the most fun part and we experimented with brushes and sponges. For some reason the gold came out much better than the silver, which was a bit greyish, so we ended up mixing it with gold paint to get a nice bronze effect. 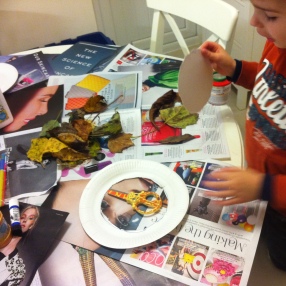 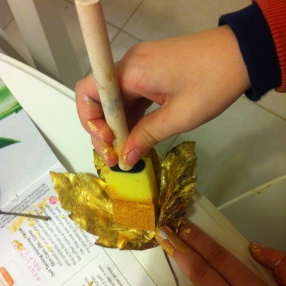 Our soundtrack for this, which Gabs chose was the Phonics Song, Wheels on the Bus and Twinkle Twinkle by the Gigglebellies:

At this point, Lucian who had disappeared into the playroom came down to see who was playing his beloved ‘Wheels on the Bus’ song and joined in, decorating his own plate with gold spots from a round sponge. Then we lined the leaves up to dry on the radiator and went to watch Peppa Pig. 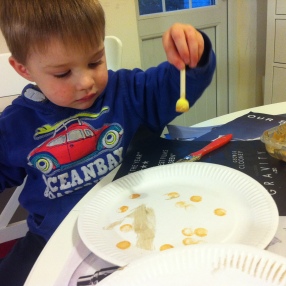 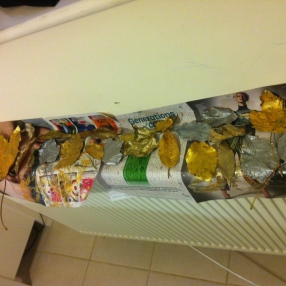 Once they were dry we started gluing and Gabs decided it wasn’t good enough to have normal PVA glue in case there were any white bits still visible after, so we mixed the glue with gold paint. It looked lovely, and I’ve seen Mr Maker do this loads of times on CBeebies but for some reason it just wasn’t sticky enough so we resorted to Pritt Stick. 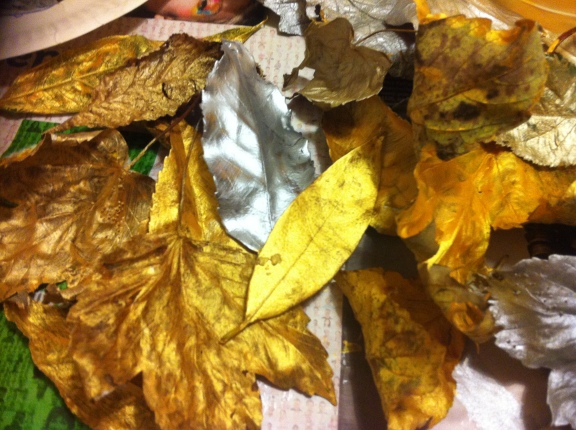 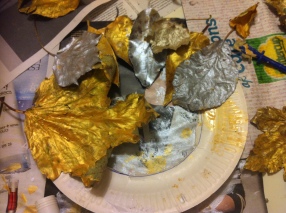 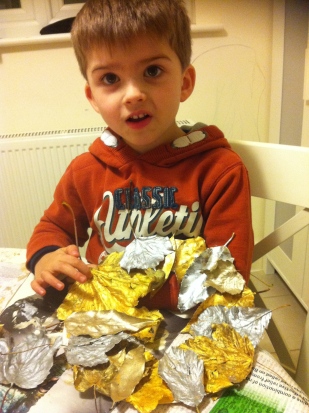 Once our wreath had dried I punched a hole in it and strung it up. What do you think?! 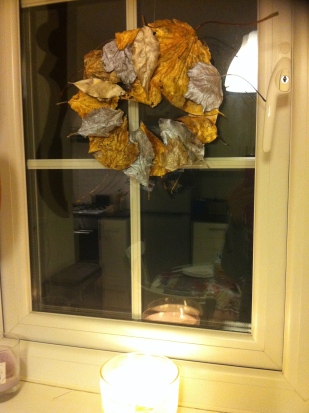 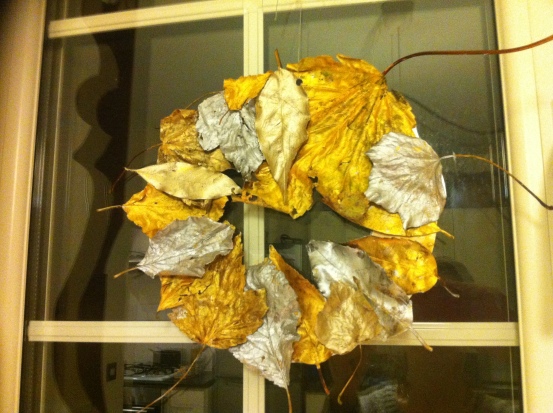