Before getting a little emotional on Friday before my last school pick-up for a long time (as my postgrad acting course at GFCA starts tomorrow – eeek!) I made sure to enjoy my last free day alone with both boys at school. I slept in, took a long walk in the sun and had a late lunch and prosecco. 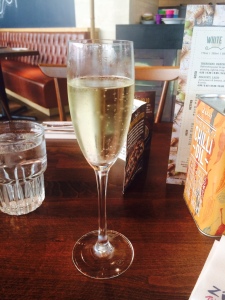 I got a little emotional thinking that I won’t be able to pick the boys up from school myself now until December, their last week of term, when my term has finished. But then, I get to drop them off, and I remembered why I’m doing this and that I’ve been at their beck and call pretty much for six years, so I think it’s time!

I really wanted to make the most of this last chilled weekend, though before the madness starts, so we had a lie-in on Saturday and I took them to the amazing Sheriff Centre Hullaballoo soft-play in West Hampstead. It’s the most amazing place, with soft play for under 2s (£2) and over 2s (£4). They get to stay in for ages, if it’s not busy I don’t think they ever kick you out! It is a huge converted church (actually still used in part as a church) but with a post office inside, sofas, free books and games to borrow, so you can sit and enjoy yourself while still keeping an eye on the kids and the café not only does coffee and nice food but also WINE and beer!! Plus the people there are lovely. In other words, it’s just heaven to a knackered parent like me. I would literally live there all the time if it were possible. They serve their tea in proper vintage, mismatched china and before my wine I had lovely porridge with cinnamon and honey. 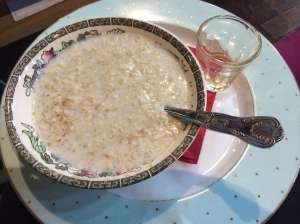 Unfortunately, two hours killing themselves in the soft-play is not enough to tire out my insane kids, so I put them in the garden to play and regretted it after both of them fell off the garden wall, one after the other. Luci first, nosedived headfirst off the wall, god knows how, and yelled in that way that even the most lazy, unsympathetic parent (me) uncharacteristically bombs it down the stairs immediately to see what’s wrong. He had a huge shiner on his forehead but 10 minutes of icepack and a cuddle later he was perfectly happy to sit in bed and watch Team Umizoomi. So I started dinner… 5 minutes later, Gabs runs in and falls dramatically on the floor, bent double. “Go to the toilet!” I cried, misreading his bending double. Then I noticed his weird breathing and crying: “I’m injured! You have to call an ambulance!” he cried, dramatically. I’m not inclined to panic but I did get a bit shaky when I noticed the colour drain from his face and his lips start to turn blue. He had scraped the whole side of his body and was clearly in shock. I panicked and got Remus out of his teaching room, when he started to say, “I’m tired” and go all floppy, I was starting to think I should set off the to hospital, but then we tried the magic, “How Serious Is It?” litmus test. We offered him his Samsung tablet to play some minecraft in bed. It works every time. If he wants the tablet, he’s fine and it’s a non-emergency. If he says no, it’s super-serious. So we gave him some calpol and water and checked on him and eventually he got some colour back and Mummy had a medicinal brandy (yucky cheap stuff I use for baking, but needs must!) 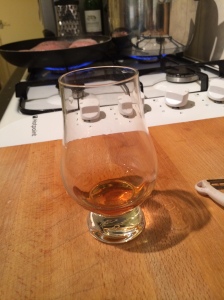 Today, Sunday, I had to teach and say goodbye to some lovely violin students who I won’t have time for anymore but who I have grown very attached to. 😦 Curiously, absolutely everyone today needed work on something major on either hand and I ended up photographing everyone’s progress so they can refer back as they practise. I am keeping my smallest pupils on, who I will teach at 8:30 on a Sunday morning for as long as I can manage it. I so love my pupils. Teaching will always be something I want to do. 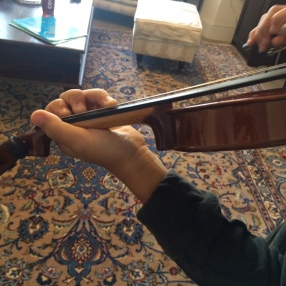 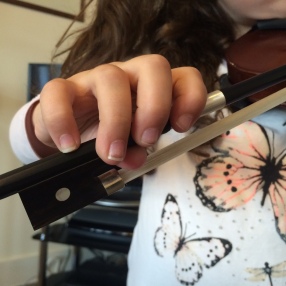 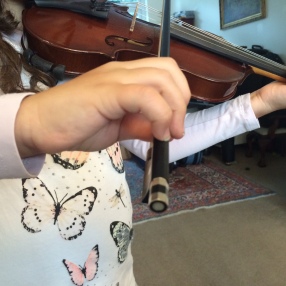 I also taught my Gabs, trying to help him get used to his new 1/4 size violin, which he’s finding a bit traumatic – Aspies don’t like change! I also cleaned the kitchen floor, made popcorn and a chocolate cake and a risotto and got Gabs to complete his homework. I was on fire today!

My crowning achievement was definitely the chocolate cake made as a treat for my amazing boys to say thank you for supporting me in pursuing my dreams and my new acting course! G for Gabs, R for Remus, L for Luci… 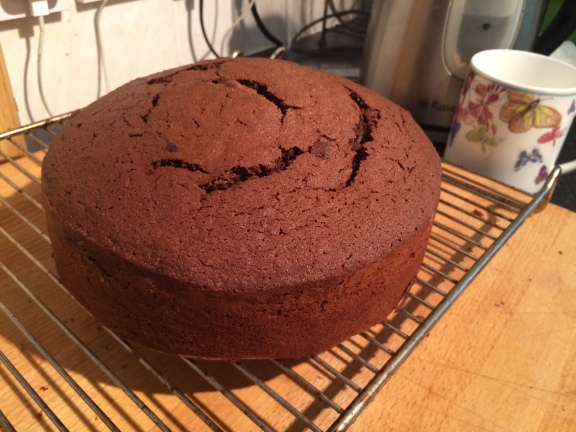 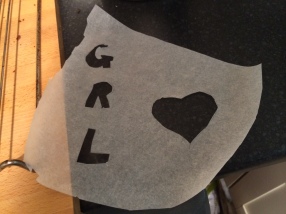 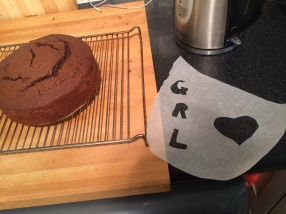 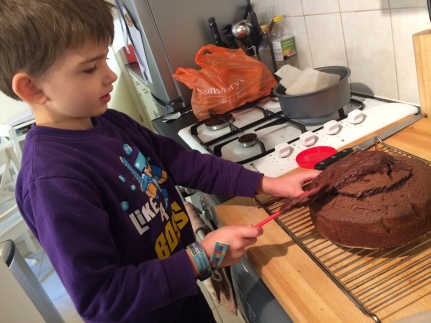 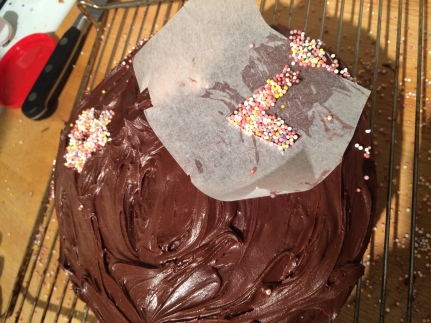 In the absence of letter cutters, I had to make templates with greaseproof paper. It didn’t work particularly well. If anyone is reading this and wants to buy me R, G & L and heart-shaped cookie cutters for Christmas I wouldn’t turn them down. 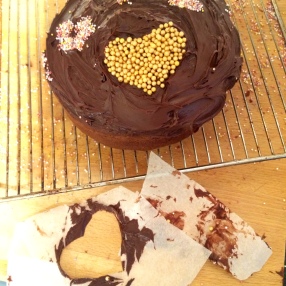 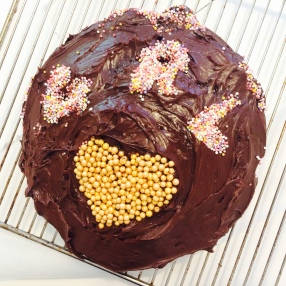 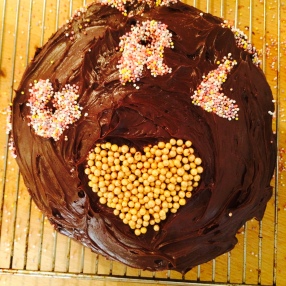 I’m not sure if they liked it… 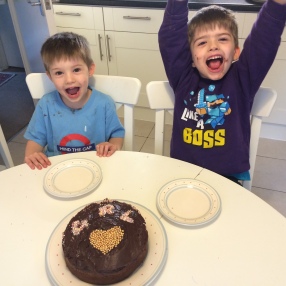 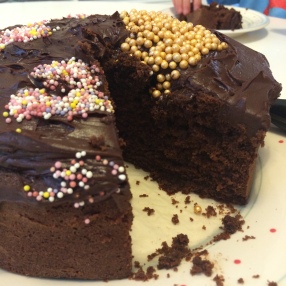 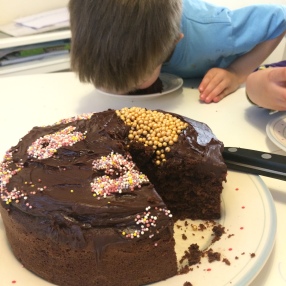 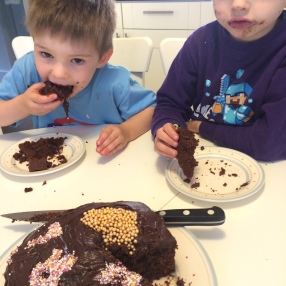 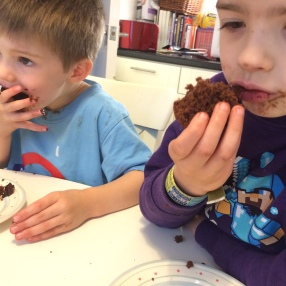 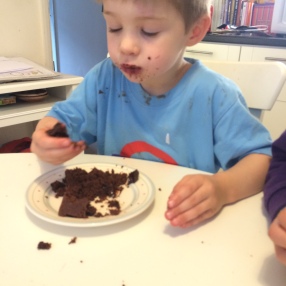 This may be the last blog I have time to write until Christmas… I don’t know. Maybe I will have time to write a bit about the course but I wouldn’t bank on it. Any post will be a bonus! So have a wonderful Autumn, all and see you in December, if not before!