When Remus was back from his big televised concert in Romania (more on that later…) we made a start on Luci’s room, taking out all the unwanted old toys and the big cupboards to make way for the bed. 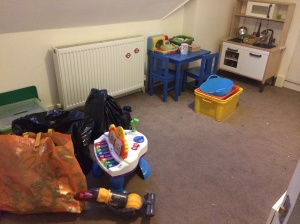 One day while I was out working with the BBC Concert Orchestra and then at acting class, Remus was looking after the kids and planned to paint the room, if they let him (nice warm magnolia instead of the horrible old graying off-white.) He thought he’d only have time to tape up the skirting boards etc. and maybe one coat if he was lucky, but in reality he ploughed through and completed the whole lot. It was super quick-drying paint so, somehow forgetting I really, really wanted to be there for this bit he went ahead and moved the bed up there, with the kids helping him carry every slat up the stairs, super-excited and jumping up and down around him as he worked. 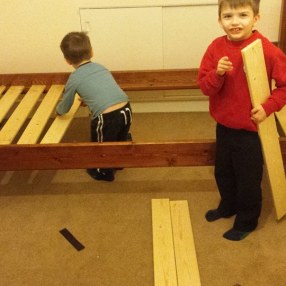 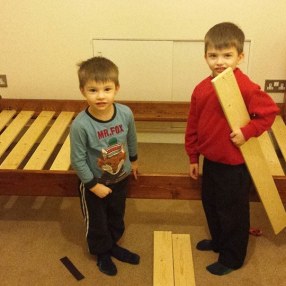 The poor guy worked so hard and expected I’d be happy so was a bit taken-aback when I came home, went up there to find Lucian asleep in his “new room” and promptly burst into tears!! I had so wanted to have the room finished just as I’d been planning for weeks (as seen in Lucian’s New Room). He felt so guilty when he realised how much I had dreamed of being there to present Luci his first ever very-own room and see the look on his face! But in his defense it was the only free time he had, the whole thing just snowballed with the kids around getting excited and he hadn’t quite realised (trying reeeeally hard not to say, “I had“!) that as soon as the bed was moved, the rest would have to follow on the same day as Luci would have nowhere to sleep…

Anyway, we rescued the situation. I carried Luci downstairs into my bed so he hardly remembered being in this room: 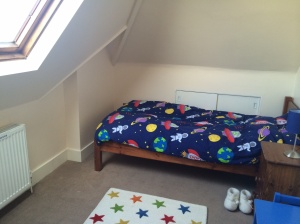 and woke up next to me. And I soon accepted that it was all for the best and couldn’t have been helped. Sometimes things just roll and you have to go with it and we ended up finishing way earlier than we would have otherwise. I kept him out of there until I managed to get the whole thing finished and got his new bedding and all the stickers and transfers on the wall – his name from Blue Daisy, my favourite ever baby shop which has sadly now closed, and the beautiful stars, to match the rug from Great Little Trading Company at the head and the foot of his bed. The stars were inspired by two things, his name ‘Lucian’ means light and he is my star and the light of my life completely, and they remind us of a very special little star in the sky, Matilda Mae who is the inspiration behind this blog: 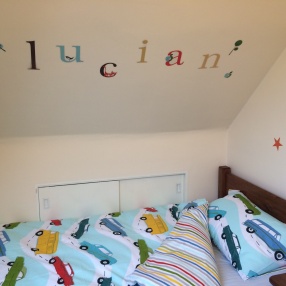 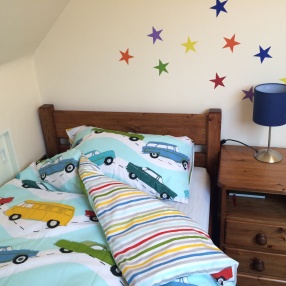 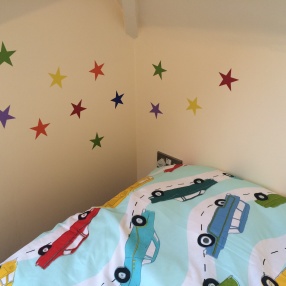 And the numbers (also from Blue Daisy) on the opposite wall: 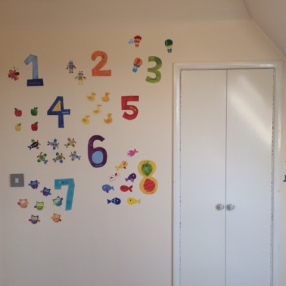 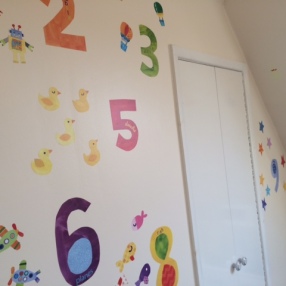 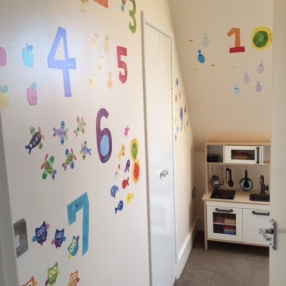 So, the room finished, here comes Luci to inspect his new place: 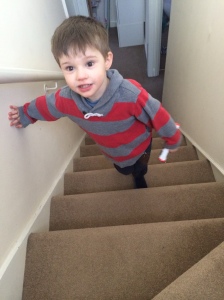 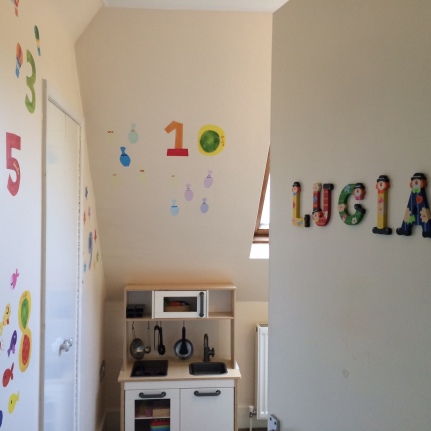 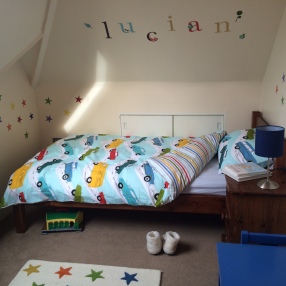 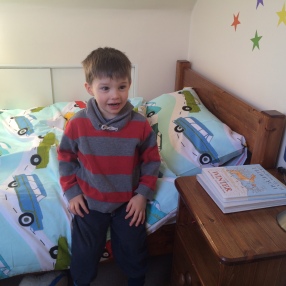 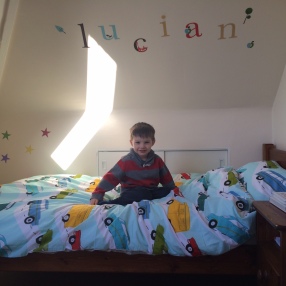 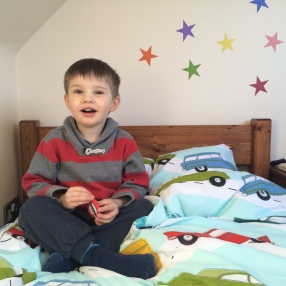 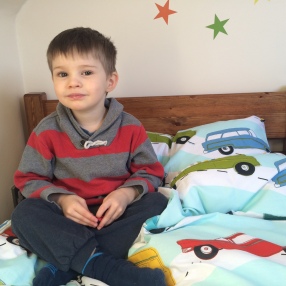 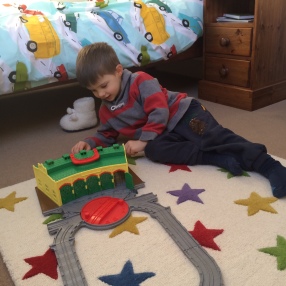 Here’s the boy, discovering his new room. He was quite cool about it, but one thing I noticed watching his body language and energy while he looked around was this kind of holding himself bigger, a really subtle puffing-up of the chest type stance. I could see him thinking, “Wow, they really take me seriously if they did this.” The poor boy has spent his whole life stuck in with Gabs, tagged on to whatever his brother is doing or has, getting all the hand me downs and never anything of his own personality and style and suddenly now he has his own place in the house and clearly, I can see him feel, his own place in our family as a VERY IMPORTANT PERSON. !!!

One of the things I love the most about Luci being up in the roof is the big window that lets in so much light: 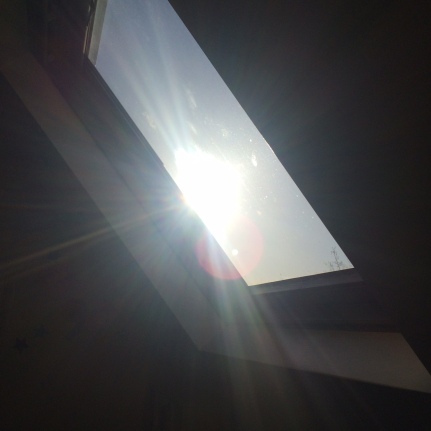 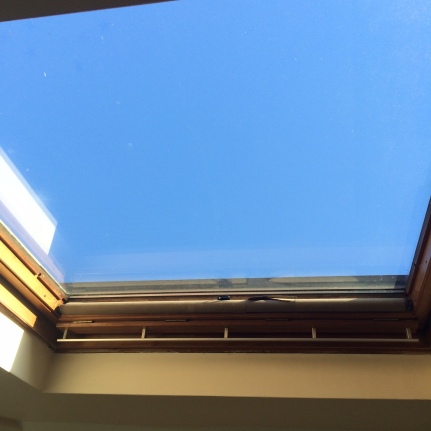 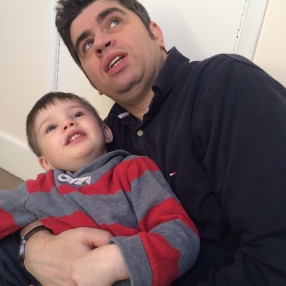 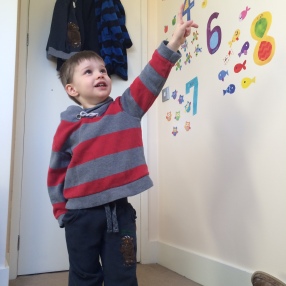 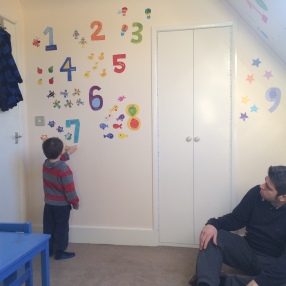 This means that Lucian can see the stars and moon from his bed at night time, something he loves and was very excited to learn! 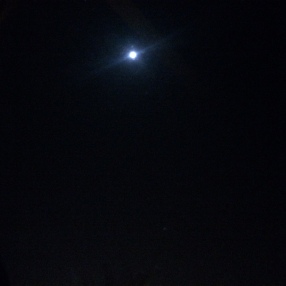 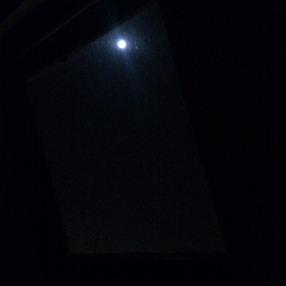 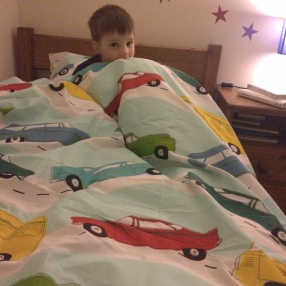 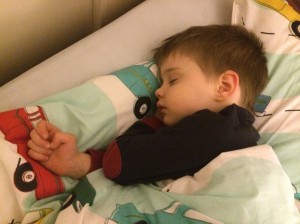